Workshop alumni Alessandro Belmonte, Wentian Diao, Egor Lazarev, and Maiting Zhuang presented papers at a session on facets of autocracy at the 2019 SIOE conference. Mary Shirley was the organizer and chair, and Konstantin Sonin was the commentator. 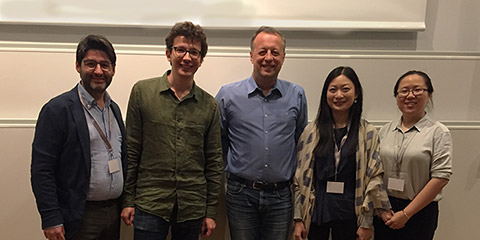 How do political elites reactivate salient collective memories to entrench their power? We study this question using data from the Russian Federation under Putin. We document a substantial recollection campaign of the traumatic transition the Russian population experienced during the 1990s, starting with the year 2003. We combine this time discontinuity in the recollection of negative collective memories with regional-level information about traumatic experiences of the 1990s. Our results show that Russians vote more for the government, and less for the liberal political opposition, in regions that suffered more during the transition period, once memories from the period are recalled on state-controlled media. We then provide additional evidence on the mechanism and find, using a text analysis of 3,832 local newspapers, that recollection of the chaos of the 1990s in local newspapers is associated with higher electoral support for the government.

Do warlords, as substitutes for the state or “stationary bandits” in the sense of Mancur Olson, promote economic growth? This paper provides evidence on the warlords’ significant positive effect on China’s economic growth in the early twentieth century. By treating the sudden death of Yuan Shikai (1859-1916), “the Father of Warlords”, as a quasi-natural experiment, I find that firms in counties occupied by warlords (i.e., with at least one garrison there) grew faster than counties without such warlords during the succeeding Warlord Era (1916-1927). To exclude potential reverse causality I use the distribution of the New Army garrisons, the national military forces in the previous empire, as an instrumental variable. The results of the instrumental variable estimation are consistent with the baseline results. The evidence supports the positive effect of warlords, both directly through investment and indirectly through the provision of public goods, reduction of the tax burden, and maintenance of social stability. These results are consistent with Mancur Olson’s argument that stationary bandit has an encompass interest to provide a peaceful order and other public goods in exchange for taxation. The heterogeneous effects of warlords are also examined. The empirical results suggest that the positive effect of warlords is weakened in those counties that (1) were more easily attacked by others, causing warlords to become short-sighted and less likely to promote growth, as Olson argued, and (2) had abundant mineral resources that could be easily exploited without the need to promote broader development, consistent with the resource curse argument.

When and why do authoritarian governments in the post-colonial states promote non-state legal orders, such as customary law and Sharia, that seemingly undermine state monopoly on rule-making and enforcement? The conventional wisdom is that non-state legal orders persist in post-colonial settings due to weak state capacity, path dependency, or culture. In contrast, I argue that promotion of non-state legal orders is a rational political strategy pursued by political leaders who aim for 1) gaining additional legitimacy; 2) increasing discretion; 3) coalition-building, and 4) signaling autonomy vis-à-vis the metropole. If the benefits are so appealing, why then do some political leaders pursue this strategy, while others don’t? I assume that the major costs for a ruler are that non-state legal forums might be hijacked by the challengers to their rule and that the metropole might punish the peripheral leaders for undermining the established legal order. Therefore, I argue that the promotion of non-state legal orders depends on the relative strength of the authoritarian ruler vis-à-vis the potential local opposition and the metropole. I develop this argument with an in-depth analysis of Chechnya under Ramzan Kadyrov’s rule (2007-present). I put contemporary Chechnya in historical and comparative perspectives with the de facto independent Chechnya (1991-1999) and the neighboring region of Ingushetia. The analysis highlights the political logic of informal institution-building.

We assess the effectiveness of using career incentives to motivate bureaucrat performance. We collect data on the career history of all Chinese Communist Party (CCP) secretaries, who were in power in any of China’s 334 prefectures between 1996 and 2014. We identify the causal effect of career incentives on performance by exploiting variation in the competitiveness of promotions. We find that increased promotion incentives cause bureaucrats to adopt a strategy that relies on real estate investment and rural land expropriation, resulting in faster overall GDP growth; but also suggestive evidence that they lower investment in education and health. We corroborate our findings using survey and remote sensing data, and present evidence that expropriations are positively correlated with adverse individual outcomes, with arrests of local officials, and with the emergence of "ghost cities".