Workshop alumni Mariel Bedoya, Valentin Seidler, David Soto, and Megan Teague presented papers in a session on institutional persistence at the 2015 ISNIE conference. Mary Shirley was the organizer and chair, and Douglas Allen was the commentator. 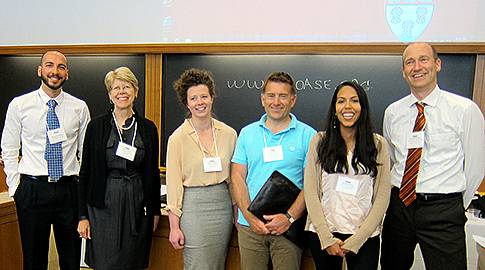 
We use exogenous variation in the territorial delineation of Pre-Inca Peruvian cultures to identify possible effects of the establishment of first cities and institutions on indicators of living standards today: present day household consumption and education attainment. For this, we employ Peruvian National Household Surveys from 2007 to 2011 and a regression discontinuity design (RDD) under a multidimensional approach. Our results indicate that households living in areas where these cultures' cities settled present 10% lower household consumption than households living marginally outside these areas. Also, education attainment of mothers is 0.4 years less than those of mothers marginally outside, on average. Results suggest that given the initial geographic characteristics and the importance of these cities, colonizers selected these areas to conquer and impose oppressive institutions related to the exploitation of minerals. The institutions imposed would have neglected the improvement of welfare in these areas, leading to lower household productive capacity and lower human capital accumulation, among other effects. We examine the possibility of differentiated effects between urban and rural households, and the possibility of bias due to the presence of capital cities. Results are robust to a number of different specifications of the RD polynomial and subsamples.

Empirical research (Grajzl and Dimitrova-Grajzl 2009, Berkowitz et al. 2003) indicates that imported law lacks effectiveness unless it is successfully adapted to local legal norms. The need for institutional adaptation has been discussed from a theoretical point of view in institutional economics (Boettke et al. 2008, North 1994). Bureaucrats are believed to be central in adapting foreign institutions as intermediaries but their impact on institutional quality has never been fully explained. This paper investigates the extent to which bureaucratic capacity contributes to the success of institutional transplants. It exploits the fact that during decolonization a large number of former British colonies intensively imported European institutions. There is a certain degree of variation of institutional quality among these states today, but there is no robust theory that explains it. The authors use data of former British colonial officers which were collected at the Institute for Advanced Study in 2014. We offer a human capital theory of governance transplants by using the proportion of expatriates (former colonial officers) among civil servants at the time of independence as a proxy for bureaucratic quality and adaptation.

Spain today presents a geographically concentrated distribution of societal traits that are related to political participation. This paper examines the historical origins of those regional patterns. The thesis here is that, before the unification processes of the 18th and 19th centuries, regions followed substantially distinctive political paths leading to the current disparities. The characterization of the political trajectories draws on the regional legal histories, with specific focus on the experiences of municipal autonomy in the High Middle Ages and the levels of constraints on the executive in the Modern Age. The regions that historically experienced more inclusive political systems exhibit currently higher levels of political culture of participation. The empirical evidence for this thesis is found at regional and individual level.


This paper investigates the persistent effect of cultural identity on the political equilibrium in the European Union (EU). We do so by examining the relationship between the 1992 referendum on accession into the EU and cultural identity across French regions. We show that regions in which citizens self-identified with their local communities, as opposed to identifying with 'France', were also much more likely to vote to join the EU. We use data from the 1789 Cahiers de Doléances as well as a survey of French language usage in 1864 to confirm that the regions voting for accession to the EU in 1992 had a deep historical tendency to affiliate with local institutions. We conclude that the regions that voted yes in 1992 likely did so because they saw the EU as an alternate source of support for their local interests. This undermines the argument of 'functionalists' who see the EU as a catalyst for integration.