Four workshop alumni - Ben Zou, Yunzhi Hu, Meina Cai, and Mi Luo - presented papers on modern China at the 2011 conference of the International Society for New Institutional Economics. Mary Shirley organized and chaired the panel, and Nobel laureates Kenneth Arrow and Douglass North served as the discussants. Over 200 scholars attended the conference, held on the campus of Stanford University. 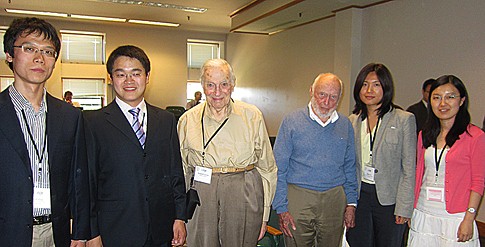 Do village elections in rural China with open nominations select better qualified leaders as compared to the previous appointment system? Using a unique sample of elections between 1982 and 2006 in 246 villages from 29 provinces, this paper analyzes the effect of elections on the years of schooling and pre-election managerial background of elected leaders, under both two-way fixed effects and ordered probit specifications. Using elections with open nominations has a significantly positive effect on both measures of leaders' qualifications. Compared to appointed leaders, elected leaders have about one year more of education and a doubled probability of having previous management experience. Endogeneity issues are addressed with a quasi-natural experiment of an election law enacted in 1998. Future research will examine the correlation between leaders' qualifications and subsequent village performance in this context.

What impact does the introduction of voting for village committee in China have on the allocation of local public funds? Does that effect vary with local Communist Party's role in elections? I examine these questions for a sample of 241 villages from 1987 – 2002. Employing a differences-in-differences approach with village fixed effects, I find that introduction of elections increased the probability of yearly village-funded public goods investments by 36%, increased village-to-household transfers by 16%. However, when a Party branch member won the election as village committee chair the probability of public goods investment increased only 28% and village-to-household transfers were essentially no different from those in villages without elections. While the consent of the Party branch is necessary for the village committee to make these allocations, controls by the Party are greater when its local branch member is elected as village chair. Committee chairs who were also Party branch members were more likely to be re-elected subsequently than others. The results suggest that Party oversight reduces the effect of holding village elections.