Workshop alumni Yuan Li, Stanislao Maldonado, Israel Marques, and Michael Rochlitz presented papers at a session in honor of Douglass North focussing on Violence and politics at the 2016 SIOE conference. SIOE was formerly known as the International Society for New Institutional Economics (ISNIE). Mary Shirley was the organizer and chair, and Thrainn Eggertsson was the commentator. 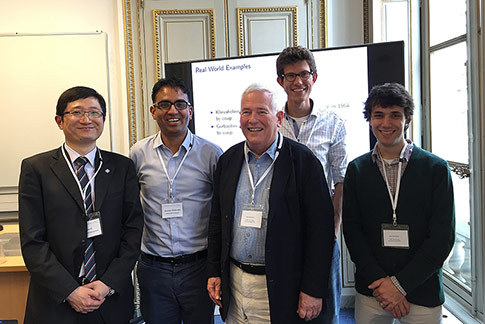 Any political leader, even an autocrat, must be judged by her supporters and by the citizens. Autocratic regimes control the diffusion of information through the country so that the effects of some policies are more opaque thus difficult to be evaluated. This paper looks at the effect of multidimensional policies on the functioning of autocracies. Our main objective in this paper is to study the effects of these differences in public perception on the dictator's accountability towards the selectorate and the citizens. First, we generalize the available results on accountability in autocratic polities, showing that the region of the selectorate's de facto power such that reciprocal accountability works shrinks as opacity increases. Second, we show that both the probability of full efficient and full inefficient policies decrease as opacity increases. Third, we find the dictator and the selectorate might have a conflict on the optimal amount of transparency. Finally, we find that the size of the parameters’ regions where a dictator implements efficient policies change non-monotonically with respect to opacity.

How do resource booms affect politicians' decisions to use violence to contest elections? Using a unique dataset on local government elections in Peru, we examine the impact of an exogenous increase in mining rents on electoral violence. While the relationship between natural resources and civil conflict in weak institutional environments has been largely explored, little is known about how natural resources affect politicians' choices of violeny means to affect election results. We find that electoral violence increases as resource rents increase, but only up to a certain threshold. When rents become very high, electoral conflict is negatively associated with mining royalties. This non-monotonic relationship fits with the North, Wallis, Weingast (2009) model of a limited access society. As rents increase, dominant elites have greater incentives and more capacity to monopolize the means of violence in order to strengthen their control over rents. Their large and growing rents enable them to buy electoral support, buy off opponents, and discourage violent challenges.

Work on the political economy of investment emphasizes the importance of credible commitments between firms and the state for development. How can credible commitment be generated in environments characterized by pervasive state-led violence, expropriation, and weak institutions? This paper explores this question through the lens of public-private partnerships in vocational education in Russia’s regions. Research on the OECD emphasizes a strong civil society – unions and employers’ associations – along with free-markets and good state institutions as crucial for cooperative co-investment in vocational education. Yet in many Russian regions, cooperative vocational education reforms have emerged despite weak civil society, poorly functioning markets, and pervasive state predation. In this paper, I argue that absent strong formal institutions, personal ties between state officials and the business community can generate credible commitments and co-investment. Pervasive connections allow firms to acquire information about potential partners within the state and punish low-level officials for misbehavior, mitigating fears of expropriation. The state in turn can insure that firms cannot free-ride on cooperative institutions, creating credibility between firms. To test this theory I take advantage of an original dataset of all public-private partnership contracts between Russian firms and public vocational education institutions for 2013. This work has important implications for research on business-state relations and investment in violent, weakly institutionalized settings.


Violent Pressure on Business and the Size of the Informal Economy:
Evidence from Russian Regions
Michael Rochlitz
Higher School of Economics

Does violent pressure on business influence the decision of firms to stay in the informal economy? Using evidence from Russian regions, this papers finds that the result depends on the type of violence. Physical violence in a given region is positively correlated with the number of people working outside the corporate sector, but negatively with the degree of competition from the informal sector. On the other hand, insecure property rights for entrepreneurs and investors increase the amount of competition from the informal economy. These findings are consistent with a theory where firms seek the protection of the formal economy against different types of physical violence in regions with decentralized predation, but hide in the informal economy against predatory state officials and corporate raiders in regions where predation is centralized.