Workshop alumni Anthony Cookson, Desiree Desierto, and Dominic Parker presented papers in a session on law and economics in tribute to Ronald Coase, held at the 2014 ISNIE conference. Mary Shirley was the organizer and chair.


ABSTRACTS BY THE PANEL

This paper studies the effects of judicial institutions on investment and employment using an industry-by-industry approach, combined with the legal context of American Indian reservations. Using variation in legal institutions from a quasi natural experiment, better-understood courts lead to greater employment and more establishments among high-sunk-cost industries while having minimal effects on low-sunk-cost industries. The heterogeneity in effects across industries is consistent with the hypothesis that better-understood courts overcome a potential hold-up problem in contract negotiations. Beyond American Indian reservations, these findings suggest broad and wide-reaching effects of the nature of court systems on economic activity. 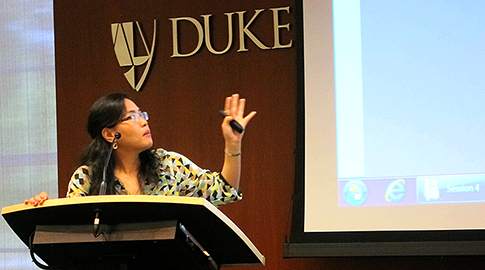 Is the Philippine Supreme Court independent from the Executive branch? Using data from Haynie et al.'s (2007) High Courts Judicial Database, I compare how each of the ten Chief Justices from 1970 to 2003 decides cases involving the national government two years prior and tow years after their appointment as Chief Justice, in a difference-in-difference framework. To verify whether differences could be due to selection bias from the possible non-random assignment of cases and strategic timing of decisions, I also verify whether panels that did not include the Chief Justice exhibit difference in behavior during the same four-year time periods. I find that they do not. In contrast, it is only the panels that include the Chief Justice which show some significant differences in the probability of favoring the government in its decision pre- and post-appointment of the Chief Justice. 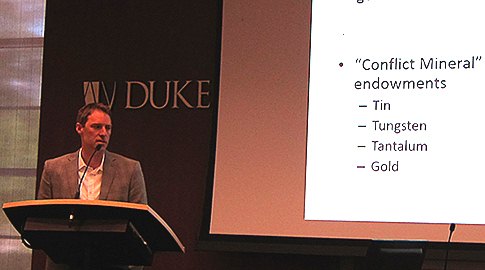 Resource Cursed or Policy Cursed?
U.S. Regulation of Conflict Minerals and the Rise of Violence
in the Congo
Dominic P. Parker
University of Wisconsin
Bryan Vadheim
London School of Economics

There is widespread belief that violence within poorly governed countries is triggered by surges in international demand for the countries' natural resources. We study the unintended consequences of U.S. legislation that is grounded in this belief, the so-called "conflict minerals" section of the 2010 Dodd-Frank Act. The Act discourages large electronics companies from sourcing minerals from the eastern Democratic Republic of the Congo in an effort to cut off funding to armed thugs who profit from the mineral trade. We develop a theory to explain why the legislation could backfire, causing violence to increase rather than fall. Our reasoning is inspired by Mancur Olson's stationary bandit metaphor and a literature on the citizen protection functions served (and coerced) by organized criminals. We test for the short-run effects of the legislation by merging geo-referenced datasets on armed conflict, militarized mining sites, and mineral prices, focusing on 2008-2011. The evidence suggests the legislation increased the incidence of violence against civilians throughout the targeted region, and it shifted the incidence of battles between militia groups away from regulated tin, tungsten, and tantalum mining territories towards unregulated gold mining territories.