Four workshop alumni - Carlos Brando, Fali Huang, Thales Pereira, and Helen He Yang - presented papers on the long-run adaptations of institutions at the 2012 ISNIE conference. Mary Shirley organized and chaired the panel, and Philip Keefer and Gary Libecap were the discussants. The conference took place on the campus of the University of Southern California. 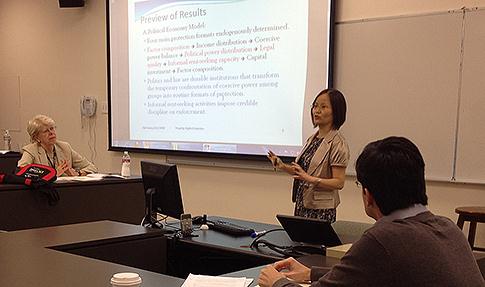 How Was Banking Credit Allocated During Colombia's Industrialization? The Politics of Finance in a Developing Country
Carlos A. BRANDO
London School of Economics and Political Science

Accounts of Latin America's economic development in the middle of the twentieth century have been, and still are, dominated by interpretations framed under state-led and/or import-substituting industrialisation (ISI).  This conventional literature attaches an extensive and penetrating role to the Latin American state in several policy fields, of which credit is a most important one.  The current version goes that these states intervened heavily in money and capital markets to prioritise the channelling of ample and cheap supplies of credit to manufacturers, and in this way advanced official projects of protected industrialisation. This paper demonstrates that this was not always the case, as illustrated by the Colombian experience.  In this case, the demands imposed by a highly clientelistic political system forced elected politicians to direct public financial resources away from manufacturing and into agriculture, particularly to coffee-growers.  Preferential credit was channelled to agents competing in external markets rather than those producing for domestic markets in closed/protected economies.

This paper explores the inherent links between different forms of property rights protection including coercive force, political power, and law from a historical or evolutional perspective. It finds that it is not possible to have a strong rule of law with a corrupt political system, or to have a democratic political system when the distribution of coercive force is too skewed.  In other words, there seems to exist a clear sequence of different forms: only when individuals are relatively equal in using coercion to protect their own property would a just political system be adopted and sustained as the predominant form of property rights protection, and only when a stable and just political system is operational would the rule of law gain support as the routine form of protection.  The predictions of the model are consistent with general historical patterns in Western Europe.


An Experiment in Social Orders: The Development of Property Rights
in Small Landholdings in Brazil (1850 – 1889)
Thales A. Z. PEREIRA
Universidade Federal do Rio Grande do Sul

How have differences in political power and economic resources in 19th century Brazil affected the  long-run  evolution of  institutions and living  standards? From 1850 to the end of the monarchical regime in 1889, Brazil had a closed political system with a dominant coalition of rural elites limiting access to resources. However, during this same period, Brazil also conducted an experiment in open social orders.  Government sought to expand the small population base of the southern provinces by attracting foreign labor. To do this, it created approximately twenty small landholding settlements in regions with low population density. Their development was crucial for attracting more immigrants; for this reason the government provided  these settlements with a special institutional environment that included housing subsidies and poor relief.  Today, over a century later, these areas have some of the highest economic and social indicators in Brazil. This success story is normally associated with  the presence of immigrants from countries with more developed educational systems. This paper argues that  ocal political institutions, not human capital, were the main factors for the development of the high standard of living in these regions. Using micro level data from Provincial Presidential Reports and other archival documents,  this study examines how government social transfers can lift people out of a poverty trap and establish secure property rights. It concludes that open social orders can develop in a closed political system in the existence of institutional arrangements that control opportunistic governmental behavior.

During the Ming and Qing Dynasties, fixed-rent tenancy gradually replaced sharecropping as the dominant form of land tenancy in China. This paper posits that the shift in land tenancy was generated by the technological movement from annual cropping to multiple cropping. To test the hypothesis we exploit a unique dataset gathered from the rent collection archives of Confucius's Lineage in the Qing Dynasty. We estimate the effect of the adoption of wheat-soybean double cropping on the choice of tenancy contract, share contract versus fixed-rent contract. We find that double cropped plots were 30.1% more likely to be managed under fixed-rent contracts than annually cropped plots. The finding is consistent with the factor market imperfections theory. Switching to a double cropping system, farming activities become more complex and the marginal value of tenants' managerial inputs increases. To induce more managerial inputs from tenants, tenancy contract should provide higher self-monitoring incentive.