Workshop alumni Marc Goni, Katrina Kosec, Ning Leng, and Alberto Simpser presented papers at a session on political economy at the 2018 SIOE conference. Mary Shirley was the organizer and chair, and Scott Gehlbach was the commentator. 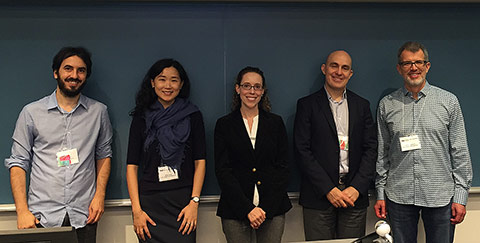 This paper studies the relationship between landownership concentration and state-sponsored education in nineteenth-century England. Using newly compiled data on a wide range of education measures for 40 counties and 1,387 local School Boards, I show a negative association between land inequality and human capital. To establish causality, I exploit variation in soil texture and the redistribution of land after the Norman conquest. In doing so, I document a strong persistence in inequality over eight centuries. Next, I show that the estimated effects are stronger where landlords had political power and weaker for education demand, suggesting that landownership affects state education through the political process.

When the Market Fails to Serve Politics:
De-privatization of Urban Buses for Officials’ Career Advancement in China
Ning Leng
University of Wisconsin-Madison

Why do Chinese city governments take over private bus firms, which have successfully provided local transportation at low cost for more than thirty years? This is particularly puzzling considering how private bus services are considered more efficient, and how state provision of bus service aggravated the dire fiscal situation of Chinese local governments, going against the central government’s instruction for more private provision of public transportation. Drawing from in-depth interviews and a survival analysis on an original dataset of 233 cities, I provide a novel explanation for de-privatization in an authoritarian context. De-privatization of the bus sector is primarily a political measure whereby local officials remove resisting private bus firms when launching unsustainable projects in the sector. Subject to an ineffective cadre evaluation system, local officials seek other opportunities to signal capability to the upper level government. One popular strategy is to launch “high-visibility projects”—infrastructure projects that boast scale and looks that signal responsiveness to national development initiatives. To avoid blame for wasteful spending, local officials ask private firms to pay for these projects. Because these career-driven, often unsustainable projects cannot easily bring private firms returns, state-business relation deteriorates as a result, and sometimes ends up with de-privatization. This paper sheds light on the ongoing de-privatization of multiple other public service sectors across Chinese cities, including water, public infrastructure, and wastewater treatment.

How does context influence individual voting behavior “in the wild”? Experimental field studies have shown that social factors such as peer pressure or the prospect of shame powerfully influence voting behavior. But the degree to which typical citizens are exposed to such pressures in practice remains an open question, as people select the company they keep and the news they read. We use panel data for twelve million Mexican voters to study the effect of local context on individual voting behavior. We exploit observational variation in context induced by citizens who move from one locality to another between the 2012 and 2015 federal elections. We find that differences in average turnout between the origin and destination localities substantially influence the movers’ probability of turning out in the election subsequent to moving. We deploy a variety of empirical strategies to isolate causation, including stratification by locality or by city bloc of origin or destination. The effects persist in subgroup analysis by age, sex, region, voting history, and distance from home to voting booth. We also find spillover effects on household members who did not move.