Workshop alumni Georgy Egorov, Jaroslaw Kantorowicz, Sergey Sanovich, and Alan Zarychta presented papers at a session on political institutions and political markets at the 2017 SIOE conference. Mary Shirley was the organizer, Lee Benham chaired the session, and Philip Keefer was the commentator. 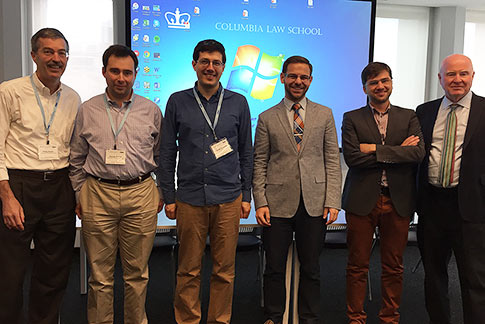 In most elections, voters care about several issues, but candidates may have to choose only a few on which to build their campaign. The information that voters will get about the politician depends on this choice, and it is therefore a strategic one. In this paper, I study a model of elections where voters care about the candidates' competences (or positions) over two issues, e.g., the economy and foreign policy, but each candidate may only credibly signal his competence or announce his position on at most one issue. Voters are assumed to get (weakly) better information if the candidates campaign on the same issue rather than on different ones. I show that the first mover will, in equilibrium, set the agenda for both himself and the opponent if campaigning on a different issue is uninformative, but otherwise the other candidate may actually be more likely to choose the other issue. The social (voters') welfare is a non-monotone function of the informativeness of different-issue campaigns, but in any case the voters are better off if candidates are free to pick an issue rather than if an issue is set by exogenous events or by voters. If the first mover is able to reconsider his choice when the follower picks a different issue, then politicians who are very competent on both issues will switch. If voters have superior information on a politician's credentials on one of the issues, that politician is more likely to campaign on another issue. If voters care about one issue more than the other, the politicians are more likely to campaign on the more important issue. If politicians are able to advertise on both issues, at a cost, then the most competent and well-rounded ones will do so. This possibility makes voters better informed and better off, but has an ambiguous effect on politicians' utility. The model and the results may help understand endogenous selection of issues in political campaigns and the dynamics of these decisions.

We apply the difference-in-discontinuities design to disentangle the fiscal effects of the governance system conditional on electoral systems. We take advantage of a natural experiment, which involves two institutional reforms at the local level in Poland. The first reform introduced two electoral rules, which change along an exogenous population threshold: smaller municipalities use majoritarian elections, larger municipalities use proportional elections. The second reform changed the governance system in Polish municipalities from “parliamentary” to “presidential”. Our results indicate that a change from parliamentary to presidential form led to lower vertical fiscal imbalance predominantly in the jurisdictions with majoritarian elections and to a lesser extent in municipalities governed by proportional elections. This therefore confirms an interaction effect between the forms of government and electoral rules.

Do Russian voters, as it is widely claimed, care more about politicians' faces than about policies of the parties they lead? In this paper, I analyze the extent to which Russian voters respond to policy cues from leaders versus the same policy cues from political parties, and how important party association versus executive position is to the cueing capacity of the incumbent country leaders. Implemented as an endorsement survey experiment, this approach allows removing endogeneity that hampered previous attempts to compare support that people lend to parties and leaders. In addition to providing a reliable estimate of personalization of politics in Russia (both for the incumbent and the opposition), I show how Vladimir Putin is able to use the weakness of the party he leads strategically, to claim victories without taking responsibility for the failures. This paper lays the groundwork for a wider project that will use similar survey experimental tools to compare the degree of personalization across countries and political systems – a vital sign that was always considered important for developing countries but is rapidly becoming relevant in many established democracies as well.

Governments across Latin America have decentralized their health systems in an effort to improve services for poor, rural populations.  Despite tremendous enthusiasm on the part of policymakers and donors, relatively little rigorous evidence exists on whether reformed system produce better services or how contextual factors influence effectiveness. In this paper we investigate the conditional effects of decentralized governance on local health services using a difference-in-differences research design and original data from Honduras.  We expect that local conditions will moderate the performance of health sector decentralization, namely that decentralization will perform better in localities with greater political competition, higher levels of participation, and larger existing resources.  The results of our preliminary analysis provide mixed support for these expectations:  decentralization does appear to increase key health services indicators overall and these effects are largest in environments with greater political competition.  In terms of existing resources, decentralization appears to produce greater increases in services within settings of relatively low human development, perhaps due to there being greater room for improvement in these settings, and general political participation does not appear to moderate the effectiveness of decentralized governance.  The results of this analysis may help inform policymakers in terms of how they target decentralization reforms locally and the types of support that may be needed so that localities with less favorable conditions also experience improvements in their services.