The winner of the 2021 Award for Outstanding Achievement is David Skarbek (2011 Chicago workshop). He accepted the award during the alumni dinner in Toronto, Canada on June 24, 2022. 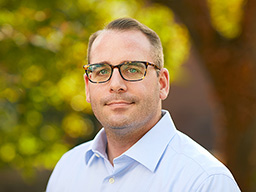 David Skarbek is Associate Professor in the Department of Political Science and Director of the Center for Philosophy, Politics, and Economics at Brown University. He studies the political economy of institutions and institutional change, with a focus on collective action, norms, and ethnic conflict. His research seeks to understand how extralegal governance institutions form, operate, and evolve. He has published extensively on the informal institutions that govern life in prisons in California and around the globe.

His work has appeared in leading journals in political science, economics, and criminology, including the American Political Science Review, Journal of Economic Behavior & Organization, Journal of Law, Economics & Organization, and Journal of Criminal Justice.  He has published two award-winning books: The Social Order of the Underworld: How Prison Gangs Govern the American Penal System, and The Puzzle of Prison Order: Why Life Behind Bars Varies Around the World.

It has been a tremendous honor to be a part of the Ronald Coase Institute community. My first participation was in the summer seminar in Chicago in 2011. Since then, I have participated in multiple RCI-organized panels at the Society for Institutional and Organizational Economics. I was also a RCI faculty member at a wonderful conference in Bratislava in 2018, and they were gracious enough to host me recently for a talk on why economists should care more about qualitative research methods. I have been educated and edified in all of these interactions with faculty, students, and peers.

One obvious outcome from these interactions is gaining a far richer and more nuanced understanding of transaction costs and institutional analysis. One key insight from Coase is that as the cost of transacting in the decentralized market rises, it becomes rational to invest in more centralized organizations, like firms. In my own work, I applied this insight to explain how substantial increases in the size and diversity of the prison population in California caused a change from reliance on decentralized norms to more centralized, racially segregated prison gangs. This was the topic of my first talk at RCI in 2011, and my book The Social Order of the Underworld: How Prison Gangs Govern the American Penal System was published in 2014. My most recent book, The Puzzle of Prison Order: Why Life Behind Bars Varies around the World likewise develops a transaction cost theory to explain variation in prison social order from a comparative perspective. In addition to drawing on his theoretical ideas, I follow Coase’s use of case studies as a productive way to understand institutions. The rich, detailed knowledge of prison life helped me to discover which transaction costs matter and why for incarcerated people.

Nevertheless, it would be insufficient to suggest that this was the primary benefit of participation in RCI events. Some of the biggest benefits I have gained professionally from RCI have resulted from the efforts of RCI leadership to reduce transaction costs. By hosting annual workshops, RCI lowers the transaction costs of meeting interesting, junior scholars who are doing new, innovative work on institutional analysis. I have learned so much from engaging with an intergenerational group of scholars working on diverse topics, but always with an eye to real world problems and employing the familiar intellectual toolkit. RCI seminars select, curate, and encourage a group of interesting people. In doing so, they reduce transaction costs and solve coordination problems about who to meet to discuss institutional ideas. For established, senior scholars working in these traditions, RCI’s focused approach provides a credible commitment that giving their time to meet and discuss the work of more junior academics is a worthy endeavor. I am a rich beneficiary of those efforts. By reducing transaction costs to the scholarly study of institutions, they have extended the scope of intellectual exchange, cultivated social networks, and helped build human and social capital in economics, political science, and law. I am humbled and honored to be a part of this community.