The winner of the 2016 Award for Outstanding Achievement is Yang Yao (2001 Rio workshop). He accepted the award and spoke at the alumni dinner in Xiamen on May 18, 2017. 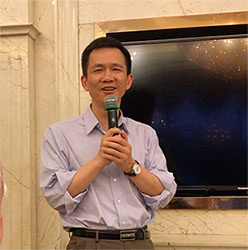 Yang Yao is a Cheung-Kong Scholar Chair Professor, Director of the China Center for Economics Research, and Dean of the National School of Development at Peking University. He is published widely, is Editor of the China Economic Quarterly, and writes prolifically for magazines and newspapers, including The Financial Times. He organizes the US-China Economic Dialogue held semi-annually. He has received numerous awards including the Sun Yefang Economic Science Award, the Pushan Award in International Economics, and the Zhang Peigang Award in Development Economics.

Yao first met the Coase Institute when he attended its workshop in Rio in 2001. Since then he has served as faculty in several subsequent workshops, has hosted a workshop and a conference for the Institute, and has trained many cohorts of students in China to do relevant empirical work on important questions. Many of them have participated in the Coase Institute workshops.

The Award for Outstanding Achievement has tremendous meaning to me. I was very lucky to get selected as a fellow of the second Coase Institute Workshop, which was held in Rio in 2001. I presented a theoretical paper on the conditions of efficient institutional change and got valuable suggestions from the mentors. Since then, I have been involved in many activities organized by the Institute. Those activities have become one of the important channels for me to reach out to the international academic community.

Ronald Coase was an inspiring figure for many Chinese scholars. For me, he represented one of the finest forms of doing research. His theories did not come from abstract deduction; rather, they came from his observations of the real world. He had the extraordinary ability to transform his observations into simple, yet profound theories.

The China Center for Economic Research (CCER) is a leading economic research institute in China. Studying the real world is definitely one of the defining characteristics of the institute. Most of its senior professors started their career in the 1980s when China’s reform desperately needed new ideas. It was the norm at the time for researchers to go to the field to find and solve the real-world issues. CCER has inherited this tradition; the institute represents the best combination of rigorous academic training and real-world research in China. We look for people whose research pays attention to real-world issues when we recruit new faculty members. Our students are required to start from real-world issues when they begin to formulate their own research programs. This strategy has paid off; CCER graduates have become a significant existence in the Chinese academic community. It is worth emphasizing here that many of graduate students have been selected by the Coase Institute Workshop; their experiences in the workshop have enhanced their inclination of studying real-world issues. CCER and the Coase Institute share the same spirit.

In my twenty years working at the institute, I have tried to carry out this combination in both my research and my teaching. My research focus has evolved along with China’s reform process. I continued my Ph.D. thesis research and studied China’s land tenure issues in my first several years in CCER. Then I shifted to studying China’s state-owned enterprises that were under profound changes during the period 1998-2005. In the last ten years, my focus has been on the political economy of China’s growth model.

In all of these research endeavors, I owe the Coase Institute for its continuous inspiration and advice to follow Coase’s example in combining theory with rigorous empirical testing. Professor Coase started a tradition of encouraging economists to go to the field and ask what’s going on in the real world. The Coase Institute workshops have encouraged me and so many CCER students to follow in Coase’s footsteps of critical and objective empirical inquiry.

I thank the board of directors of the Coase Institute for selecting me for this award. I would also like to express my deep appreciations for the three leaders of the Coase Institute, Mary Shirley, Lee Benham, and Alexandra Benham, for their long-time support to me and CCER. To me, they are more than academic colleagues; they are dear friends. To CCER, they are strong supporters and mentors for its graduate students and young professors. We in CCER all cherish our association with the Coase Institute. 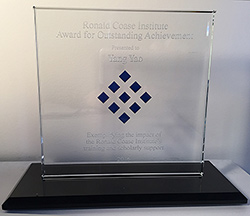