The winner of the 2017 Award for Outstanding Achievement is Konstantin Sonin (2002 Cambrige workshop). He accepted the award and spoke at the alumni dinner at SIOE in Stockholm on June 27, 2019. 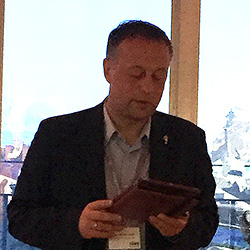 Konstantin Sonin is John Dewey Distinguished Service Professor at the University of Chicago Harris School of Public Policy. He earned a MSc and PhD in mathematics from Moscow State University and a MA in economics from the New Economic School in Moscow. He has been a postdoctoral fellow at Harvard University’s Davis Center for Russian and Eurasian Studies, and a member of the Institute for Advanced Study in Princeton.

He has been influential in guiding Russian economics studies towards high international standards. While in Russia, he served on the faculty and subsequently as Vice Rector of the New Economic School (2011-2013) and then the Higher School of Economics (2013-2014), leading schools in economics.  He continues to write a blog and contribute to a fortnightly column on economic policy in a Russian language newspaper.  He maintains an affiliation with the Higher School of Economics.

His papers have been published in leading economics and political science journals, including the Quarterly Journal of Economics, American Economic Review, Journal of Political Economy, Review of Economic Studies, American Political Science Review, and American Journal of Political Science. His research has won several medals from the Global Development Network, two Best Economist awards from the Russian Academy of Sciences, and the Ovsievich Memorial Prize in Mathematical Economics.

It is a great honor to receive the alumni award from the Ronald Coase Institute.

I am especially grateful to Alexandra and Lee Benham, who brought me into the orbit of the Institute, to John Nye and Phil Keefer, who made the most lasting impression as my workshop teachers, and to Mary Shirley who has been teaching me to plan ahead all these years.

Alexandra met me in the inaugural congress of the Global Development Network in Bonn in late 1999, but it took me a couple of years to get to a workshop in Cambridge in September 2002. Starting next year, I participated in RCI workshops as a teacher or a guest lecturer - in Budapest in 2003, in Tucson in 2004, in Reykjavik in 2007,  in Moscow in 2010....

For me, RCI was an especially important part of my professional training - my PhD was in abstract algebra. RCI and an assorted collection of great minds that I tried to pick up from - Andrei Shleifer, Roger Myerson, and Gerard Roland, among others - were the sources that filled the big gaps in my professional background. Here I met new colleagues and friends for life - even if I have not met my co-authors Georgy Egorov, Scott Gehlbach, Sergei Guriev, and Maria Yudkevich at the RCI workshops for the first time, their involvement was very important.

When I was a student at the Cambridge RCI workshop in 2002, my work was a formal model of regional vs. federal politics. The field was "economics of transition", which flourished - thanks to the interest generated by the "greatest economics experiment ever", the transition from socialism to market, - in the last decade of the 20th century - yet was already in decline by the dawn of the new century. Learning about institutional economics helped me in my personal transition - from transition economics to political economics.

Modern political economics did not start with institutionalists, though institutions have been the focus from the very beginning. Macroeconomists Kydland and Prescott singled out the central bank independence as a critical institutional constraint on an elected leader. The first classics of modern political economics, Alberto Alesina, Torsten Persson, and Guido Tabellini disguised themselves as macroeconomists as well. Andrei Shleifer, Gerard Roland, and their co-authors used what was rapidly becoming the new field of political economics to study "economic transition", the greatest economic experiment ever.

In the 21st century, Daron Acemoglu and Jim Robinson have made political economics a field of its own. In the last two decades, the core of political economics is the study of institutional evolution. Politics is the place where new laws are passed and the mechanisms of their implementation are determined. The Acemoglu critique of Persson-Tabellini "consequences of constitutions" have made Douglass North ideas much more than just theories of long-term development. Today, through its field and laboratory experiments and ingenious identification techniques, political economics is pushing the frontiers in empirical economics and political science.

I am very happy to be a small part of the political economics' push to understand and improve our world. I am very grateful to the Ronald Coase Institute for helping me to be here.