The winner of the 2018 Award for Outstanding Achievement is Maroš Servátka (2005 Barcelona workshop). He accepted the award and spoke at the alumni dinner in Warsaw on May 15, 2019. 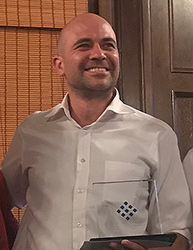 Servátka’s research in experimental and behavioral economics combines theory with laboratory and field experiments. His work has been published in general interest and leading field economics journals. He consults with industry, government, and non-profit organizations on behavioral approaches and solutions. He has done work in the areas of charitable giving helping non-profit organizations to raise funds, provided behavioral insights to businesses on market strategy, customer service, and project planning, advised government agencies on issues related to effective budget execution, studied matching algorithms used by stock exchanges, and explored governance structures of firms and behavior of employees to provide managerial recommendations. He teaches his MBA students to apply experimentation in their companies to learn what works but also what does not.

He attended the 2005 Coase Institute workshop in Barcelona, and subsequently has served as faculty for 9 later workshops.  He hosted or helped organize two of these in Bratislava.

I feel very honored to be receiving the Outstanding Alumni Award from the Ronald Coase Institute. It is symbolic to be receiving this award in the city of Warsaw, where my love affair with economics began in a Master’s program at the Warsaw School of Economics.

The Ronald Coase Institute had a profound impact on my career. When I was a graduate student I benefited greatly from attending the workshop. As a young scholar the Institute aided my professional development by facilitating two research visits to the University of Chicago that enabled me to establish a strong research network. The Institute was also influential in supporting our mission to improve economics research and education in my home country of Slovakia. Nowadays I often participate at workshops as a faculty member and keep learning about interesting economics problems and meeting inspiring young scholars. I would like to share some of these experiences with you.

My relationship with the Ronald Coase Institute started in 2005 while being in the last year of my graduate studies at the University of Arizona. After I received an acceptance letter from Alexandra Benham to attend the RCI Workshop in Barcelona, my soon-to-be-wife Autumn requested we buy two airplane tickets so she could come with. Little did I know that I would not get to see the city with her because of the busy schedule. Despite that, the two thousand dollars I spent on the airfare for both of us was by far the best investment I made in my life.

As an experimental economist I had some appreciation for the importance of institutions. If you have ever attempted to design an economics experiment involving personal or impersonal exchange, you will know that you need an institution that determines how interactions take place. Attending the workshop helped me transfer this knowledge outside of a laboratory and observe how institutions govern behavior of economic agents in everyday life. The workshop fundamentally influenced the way I view the world and ask questions about its functioning. The training on how to present and write for a wide audience that I received at the workshop helped me publish my first dissertation chapter in a highly ranked general interest journal, get my first job, and jumpstart my academic career.

My relationship with the Institute continued by attending the 2006 RCI Conference held at the University of Chicago Graduate School of Business (now UC Booth School of Business). At the conference I had the privilege to meet Ronald Coase for the first time. Despite having heard a lot about him and his personality, his wittiness and sharp sense of humor surprised me. During his talk, Ronald gave advice to all early career researchers to go and observe the world while they were young and not biased by existing theories and findings, just as he did in his young years. A participant jokingly asked why we should listen to a research presentation of a then 96-years old, to which Ronald responded: "Do not get confused as I am a young mind trapped in an old man’s body.”

The conference was important for me also for another reason as the dean of UC GSB extended his invitation to visit the George J. Stigler Center. When preparing for my visit, the dean’s office asked who I would like to meet with during my two weeks stay. After providing a list of about 50 distinguished scholars, the dean’s office advised that it was too many meetings to schedule for them, but that I was welcome to contact everyone privately. And so I did. The opportunity cost of some of the brightest minds on the planet is extremely high, but they all have to eat and drink coffee. I would therefore have four lunches and about a dozen coffees a day while chatting about research ideas to Nobel Laureates, journal editors, and scholars pushing the envelope. I left Chicago 10 pounds heavier and very energized! In my thank you letter to the dean, I mentioned all people whom I talked to. The dean could not comprehend that I managed to schedule all these meetings! When asking the UC GSB faculty whether they indeed met with me, they all responded that they knew Maroš and that he really liked coffee. The dean was so impressed that he invited me back, this time for an entire semester. Can you imagine how many coffees I had the second time around? These two visits, which came about through the Ronald Coase Institute, led to an immense scholarly growth and helped me build a strong professional network. During my second visit in 2008 I got to see Ronald Coase again when I visited him in his retirement home in North Shore Drive in Chicago. We spent a fantastic day together, talking about research, experiments, and life in general. It is one of my most cherished memories.

Roughly around the same time, a few of my close friends and I discussed how to contribute to the improvement of economics research and education in my home country of Slovakia. As other post-communist country, Slovakia was underperforming on both fronts. In a quest to demonstrate the usefulness and importance of economics research to the young generation, we established a non-profit organization, Virtual Scientific Laboratories. We started by organizing lectures, workshops, conferences, and bringing in influential economists to Slovakia so that our students and researchers could be exposed to frontier research in economics and related disciplines. One of the first such workshops that increased both our credibility and exposure was the 2009 Ronald Coase Institute Workshop in Bratislava. The workshop was accompanied by a series of lectures by the RCI faculty for the general public and attracted media attention that assisted us with raising funds for our further activities, including a Nobel Lecture Series, during which we hosted five Nobel Laureates. We also established a regular annual conference, Bratislava Economic Meeting. The activities of Virtual Scientific Laboratories culminated in a business meeting of Slovak economists from domestic and international universities and research institutes, which I organized and where I presented the idea of establishing a professional association. Having built credibility and obtained support of the community of economists, I prepared bylaws for the new organization. At the 2010 Bratislava Economic Meeting we established the Slovak Economic Association. Albeit still only nine years old, the association is a well-functioning and healthy organization, supporting economics research and education. Importantly, it created a platform for domestic and international economists to interact and collaborate and attracted the interest of the younger generations of economists. I would like to thank the Ronald Coase Institute and its founding members, Mary Shirley and Lee and Alexandra Benham, as well as the RCI faculty for the role they played in this long process and the support they provided us throughout the years.

This is my 9th workshop as a faculty member. At each workshop I learn something new, both from the other faculty members, that included such phenomenal scholars like Doug North and Oliver Williamson, and also from the participants. Over the years, I have had the opportunity to observe how the Institute fulfills its mission. Apart from the transformational experience of the workshop, the Institute provides an excellent platform for leveraging your work and creating impact, both on the academic front and amongst policy-makers.

I feel privileged and grateful to be associated with such fine institution. At the same time, I am very humbled by being selected for this award by the distinguished board of directors of the Institute.