The winner of the 2019 Award for Outstanding Achievement is Dominic Parker (2004 Tucson workshop). He accepted the award during an online ceremony held on November 18, 2020. 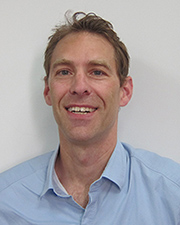 Dominic Parker is Associate Professor in the Department of Agricultural and Applied Economics at the University of Wisconsin-Madison. His research fields include natural resource economics, law and economics, development, and institutional economics. He is a coeditor at Land Economics and an editorial council member at the Journal of the Association of Environmental and Resource Economists.

Parker's research focuses on the role that property rights and governance play in affecting the extent to which societies and individuals benefit from their natural resource endowments. Topics include conflict minerals, oil booms and busts, land fragmentation and conservation, wildlife and fishery regulations, and the economies of indigenous communities. His work has appeared in the Journal of Law & Economics, The Economic Journal, Journal of Development Economics, and in leading journals in environmental and resource economics, and it has been featured in diverse media outlets such as BBC News, The Wall Street Journal, Reason Magazine, and Mother Jones.

Parker attended the 2004 Coase Institute workshop in Tucson. He has subsequently served as faculty for Institute workshops in Xiamen, China and Warsaw, Poland, and has participated in several conferences and panels organized by the Institute.

I am honored to receive the Outstanding Alumni Award from the Ronald Coase Institute. The Institute is a network of accomplished scholars. They donate time and energy to inspire, refine, and publicize the research of emerging scholars. This award is a reflection of the Institute’s investment in me. Their support helped my research become more effective and more fulfilling.

My relationship with the Institute began in 2004, when my Montana State University advisors Terry Anderson and Dean Lueck suggested that I apply to the Institute's Tucson Arizona workshop. I must have been a marginal applicant. I held a Master’s degree but little pedigree. I wasn’t on a PhD track and I had no plans for becoming a professor. Yet the screening committee – I presume it was Alexandra and Lee Benham and Mary Shirley – took a chance on me. They have an uncanny knack for spotting good research ideas and they knew I had one. For them, pedigrees are not good substitutes for good ideas.

Once in Tucson, the Institute’s faculty pushed me hard to improve my study, which was about how sovereignty can be a liability for economic development, in my case in the context of American Indian reservations. The faculty told me I had research gold that I needed to stop treating like copper. This required methodological improvement of the kind suggested by Phil Keefer and Sebastian Galiani. It also required an organizational overhaul to focus on what really mattered. Mary, Lee, and John Nye all provided forceful advice in this regard.

In the end, the paper, which was coauthored with Terry Anderson, was published in the Journal of Law & Economics after I presented an improved version at the Institute’s 2006 University of Chicago conference. For me, the paper became a catalyst for further study of how institutions affect economic opportunities for indigenous people. It set the stage for my current role as a research director of the Renewing Indigenous Economies project at Stanford University’s Hoover Institution. This is an exciting collaboration of scholars and tribal leaders who are using institutional economics in an effort to improve public policies and livelihoods for Native people.

The Tucson and Chicago experiences convinced me to pursue a career doing research at the intersection of policy, institutions, and real-world economies. The Institute has supported me throughout. For example, they promoted my research about conflict minerals at a Duke University ISNIE panel in 2014, and at a 2015 Washington DC conference in memory of Ronald Coase.  With the Institute’s help, this research used institutional analysis to study how U.S. regulatory efforts to reduce conflict in central Africa had the unwanted effects of increasing both infant mortality and violence in the Congo. The findings garnered media attention and contributed to Congressional investigations on the effectiveness of U.S. interventions.

The research projects I just described benefitted from conversations I had with the Institute’s network of brilliant scholars. Lee Benham literally sat me down at tables with Oliver Williamson and Doug North in Tucson; with Ronald Coase in Chicago; and with Ken Arrow in Washington DC. Mary Shirley introduced me to Sam Peltzman in DC and to Claude Menard at an Institute dinner in Italy.  Mary also helped me build a lasting relationship with Gary Libecap who had a steady presence at Institute events. I am grateful to all of these brilliant scholars for taking time to evaluate and critique my ideas.

Moving forward, I will continue studying the role that property rights, governance, and institutions play in affecting the extent to which societies and individuals benefit from their resource endowments. This work is at the intersection of ideas offered not only by Coase, Williamson, and North, but also by Elinor Ostrom, yet another Nobel laureate in the Institute’s network. My goal is to shine light on the institutions that govern natural resource use and conservation. For example, I am studying how historical rules about resource use prevent modern environmentalists from using markets to reduce pollution or to promote conservation.  I believe that institutional factors such as these deserve more attention from scholars of environmental and resource economics.

In conclusion, I’ll say that this Outstanding Alumni Award from the Coase Institute is an honor because it validates that I have succeeded, at least in a small way, in promoting institutional analysis. The Award is also a catalyst for me moving forward. It is a catalyst to carry on the Institute’s tradition of assisting promising young scholars who, as was the case for me, have good ideas but may lack pedigree. I have begun this work as a faculty member for recent Institute workshops in Xiamen, China and Warsaw, Poland. I look forward to continued interactions with the Institute’s young scholars. We need their help to better understand the institutions that govern our natural resources, and our economies.