The winner of the inaugural 2015 Award for Outstanding Achievement is Sebastian Galiani (2001 Rio and 2002 St. Louis workshops). He accepted the award and spoke at the alumni dinner in Tel Aviv on December 16, 2015. 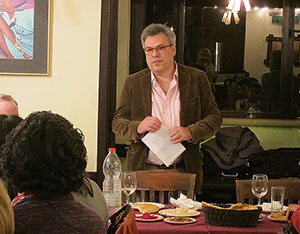 Sebastian Galiani is professor of economics at the University of Maryland and is also affiliated with the Jameel Poverty Action Lab, NBER, GRADE, and more. His research has been featured in Science, The Economist, The Wall Street Journal, and The Times. He contributes frequently to blogs such as VOX LACEA. He serves as an editor for two journals and consults for the Gates Foundation, the United Nations, IADB, the World Bank, and several governments.

Galiani first met the Coase Institute when he attended its workshop in Rio in 2001. Since then he has served as faculty for 11 of its subsequent workshops and has worked closely with young scholars to help them do more rigorous research on important problems.

It is a great honor for me to receive this prize from the Ronald Coase Institute. My academic career has been more closely connected to the RCI than to any other academic organization. Right after I finished my doctorate at Oxford, I chose to go back to Argentina for personal reasons, where I worked as an assistant professor. This was in 2001 and, almost as soon I landed, I went to Rio to attend a workshop held by the RCI. That workshop lasted for only two days, but it influenced my entire career. I was trained as a labor economist with a specialization in econometrics but, once back in Argentina, I had started to work on development economics (mostly doing causal analysis at the micro level). The RCI introduced me to a whole new body of literature on institutional economics that I had not been very familiar with before, and it changed the course of my intellectual development path. It not only influenced the topics which I ended up studying, but it also, and in more subtle ways, influenced the way that I conducted causal analysis more broadly.

The RCI is the ideal organization to be associated with if you are building your career outside the US. It provides you with an excellent network for leveraging your work. I soon became one of the faculty members at the RCI workshops. If memory serves me well, the first time was during a workshop in Budapest in 2003. The following year, at Boulder, I had the fortune to get to know Douglass North well. I had thoughtful conversations with him at a time when I was working on the causal effects of land titles on the poor (a study that was partially funded by the RCI). I also had started to visit the Economics Department at Washington University in St. Louis (WU), where Doug, John Nye and Lee Benham were faculty members. That in itself provided a strong stimulus for my career. Later, I moved permanently to WU as an associate professor in the Economics Department. This is quite an unusual career path, in that I moved from Argentina to the US to take up a tenured position exactly six years after I finished my doctorate. Lee Benham played an important role in my initial connection with WU, and I will always be thankful for that.

Since 2003 I have been a regular faculty member at the RCI workshops. I have missed some workshops, but fortunately not that many. I do know that I missed one in Barcelona because I mistook the date and got a plane ticket for the week after the workshop, and I missed one in Chicago because I fell ill just the day before I had to travel. I have enjoyed and learned a great deal in all the workshops that I have attended, and I regret missing the ones that I could not go to. Attending these workshops is a wonderful experience that allow you to get to know so many insightful, interesting scholars. You also get to meet bright students from all over the world who are thinking hard about institutions and development. I have made good friends through the years at the RCI workshops, one of whom, Colin Xu, is also a brilliant co-author as well.

I had the chance to meet and talk twice with Ronald Coase through the RCI, and I came to admire him as a person as much as I admire his work. I also had the honor of presenting a paper at his 100th birthday, thanks to my many years as a participant in RCI activities.

In 2010, while at a workshop in Moscow, I meet Peter Murrell, the then chairman of the Economics Department at the University of Maryland. We went together to see Turandot at the Bolshoi and then to dinner. We talked about economics and my work, and, in the end, he convinced me to move to Maryland, which I did in 2012.

I am deeply grateful and happy to be the first alumnus of the RCI to receive this prize, especially since the selection was made by its distinguished board of directors, which included Douglass North, who sadly passed away after a long and highly productive academic career, just a few weeks after the prize was announced. I remember Doug with great fondness and hope that he is resting in peace.