For his discovery and clarification of the significance of transaction costs and property rights for the institutional structure and functioning of the economy, Ronald Coase received the Alfred Nobel Memorial Prize in Economic Sciences in 1991.

He was editor of the Journal of Law and Economics (1964-1982). He was the founding president of the International Society for New Institutional Economics (1996-97). He was the research advisor to the Ronald Coase Institute.

- The Conduct of Economics: The Example of Fisher Body and General Motors, 2006

See list of online materials by and about Ronald Coase described by an eminent legal scholar as "a terrific set of links." 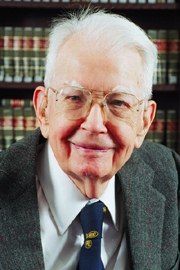